Quotes from Louis L'amour's Book Series on the Sacketts.

"When a man enters society - that's living with other folks - he agrees to abide by the rules of that society, and when he crosses those rules he becomes liable to judgement, and if he continues to cross them, then he becomes an outlaw."

"Up to a point a person’s life is shaped by environment, heredity, and changes in the world about them. Then there comes a time when it lies within their grasp to shape the clay of their life into the sort of thing they wish it to be. Only the weak blame parents, their race, their times, lack of good fortune or the quirks of fate. Everyone has the power to say, "This I am today. That I shall be tomorrow."

"A man needs heroes. He needs to believe in strength, nobility and courage. Otherwise we become sheep to be herded to the slaughterhouse of death.

"The thieves and killers are goin' to have guns, so if the honest men don't have 'em they just make it easier for the vicious."

"Every man wishes to believe that when trouble appears he will stand up to it, yet no man knows it indeed before it happens."

“...the way I figure, no man has the right to be ignorant. In a country like this, ignorance is a crime. If a man is going to vote, if he's going to take part in his country and its government, then it's up to him to understand.”

“It is not good to be too bold. A little fear makes a man think. It is better to be a little afraid, and yet do what has to be done.” 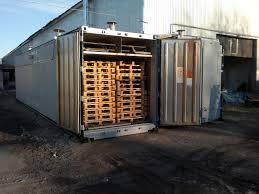 The obliteration of marks on used pallets is a big task that is expensive and can create ongoing nonconforming issues for recycling operations. Under the proper guidance and oversight, a secondary heat treat facility (SHTF) can be created to avoid obliterating old marks on every pallet that passes through the entire operation. The SHTF is a separate company at the facility that encompasses the heat chamber and acts as a contract heat treating operation on site. TP's agreement and monitoring are then with this company and not with the main operation. There are specific requirements related to the establishment of a SHTF which are listed below, and these must be strictly followed to avoid major issues.

There is an additional cost for utilizing this program, but the amount is small in comparison to what a recycler can save in labor and paint. This is because TP's agreement is only with the SHTF and not the larger recycling operation, so the larger facility's pallets do not fall under the WPM program's oversight.

Is Your Facility Moving?

Facilities that change locations or ownership should make certain to notify their TP Inspector or our office as early as possible. Doing so can help to prevent issues related to invoicing along with the processing and applying of payments received.  Our clients are extremely important to us and your cooperation in this area is vital in keeping our information up to date. Please let us know if you have any questions and thank you for assisting us in this area.