Words of Wisdom from Our Founding Fathers - Alexander Hamilton

"Those who stand for nothing fall for everything."

“The constitution shall never be construed...to prevent the people of the United States who are peaceable citizens from keeping their own arms.”

"A nation which can prefer disgrace to danger is prepared for a master, and deserves one.”

“Why has government been instituted at all? Because the passions of man will not conform to the dictates of reason and justice without constraint.”

“The best we can hope for concerning the people at large is that they be properly armed.”

“The truth unquestionably is, that the only path to a subversion of the republican system of the Country is, by flattering the prejudices of the people, and exciting their jealousies and apprehensions, to throw affairs into confusion, and bring on civil commotion.”

“Unless your government is respectable, foreigners will invade your rights; and to maintain tranquillity, it must be respectable – even to observe neutrality, you must have a strong government.”

“In framing a government which is to be administered by men over men, the great difficulty lies in this: you must first enable the government to control the governed; and in the next place, oblige it to control itself.”

“There are seasons in every country when noise and impudence pass current for worth; and in popular commotions especially, the clamours of interested and factious men are often mistaken for patriotism.”

“When the sword is once drawn, the passions of men observe no bounds of moderation.”

It is the policy of the ALSC that wood packaging facility quality marks, grade marks, grade stamps, labels, brands, certificates or other product description shall not misrepresent wood packaging products, in this program or outside it, including, but not limited to, reference to the IPPC standard directly or indirectly.

According to an ALSC statement "ALSC has consistently interpreted this provision to mean (as is the case with lumber) that nonstandard grade names, web addresses, marketing language (the category a corporate logo would fall), and other similar information may only be shown on IPPC marked material if it is located at least 6 inches from the grade mark. This interpretation has been enforced by ALSC and accredited ALSC agencies historically without exception."

There have been several inquiries related to this in recent weeks and ALSC has determined that it is time to amend the Wood Packaging Enforcement Regulations to express this policy explicitly.  Based on acceptance by the Enforcement Subcommittee, the following sentence will be added to the section 5.6.9:

“Nonstandard grade names, web address, marketing language and other similar information may be shown on IPPC marked material if located at least 6 inches from the IPPC mark.”

ALSC wants facilities to understand that past enforcement of the 6" rule was required and this upcoming clarification in section 5.6.9 will ensure that current and future processes will have this enforced at facilities.

It is important when surrogate blocks are utilized, they are properly cooled down and not hot when placing in the heat chamber.  This preheating can occur when blocks are re-used from a previous charge or left in the sun while waiting for use.  Hot blocks can be seen on heat chamber reports as shown in the example below. 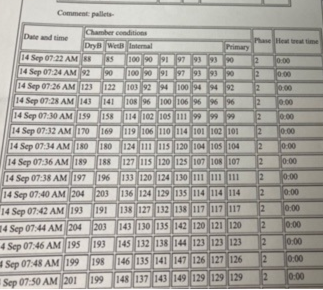 On the example provided, the ambient temperatures inside the heat chamber are documented at 88° and 85° F, while the probe temperatures in the surrogate blocks are readng between 91° and 100° F.  This indicates the probes were placed in blocks that were hot prior to use.  This would be a non-conformance.  Keep in mind that surrogate blocks need to reflect the coolest pallets in the chamber.  Pallets setting outdoors will have shaded units to the interior of the rows, and the surrogate blocks need to reflect the coolest wood being placed in the heat chamber.  Another concern would be a fast ramp up time on the probe temperatures.  If a probe goes to 140° F in a short period of time (e.g. 10 minutes from the start of the chamber) this indicates the probe is not properly placed in the wood, and this would be a non-conformance as well.  Make certain when using surrogate blocks that:

Heat treating is the foundation of the WPM program and it is important that it be correctly performed.  Having the proper understanding of the regulations and requirements will allow facilities to consistently maintain conformance.